In the tradition of ch’i (气), past and present, we have a paradigm that accurately corresponds with how artistic expression happens and heals through the circulation and transformation of creative energy. It is a thoroughly empirical approach to forces inherent in all of nature which include physical and psychic elements of creative action. Beginning with reflections on the qualities of ch’i and how it has been interpreted in the West, this article explores its presence and cultivation. The historic Taoist and Confucian emphasis on nurturing ch’i as a personal way of participating in the more comprehensive creative processes of nature offers a timely practical and conceptual model for how art heals.

1. What is ch’i and how does it relate to artistic expression and soul?

The idea of ch’i as a real, empirical, and creative force moving through all of life aligns with my experience of the process of artistic expression—how art happens and how it heals.

My sense is that in East Asia and beyond there is general agreement as to the nature of ch’i as a force that is both physical and psychic and integral to all forms of life. Many of us in the West view soul in a closely related way, as the distinctive energy and character of an expression, being, or entity. Both ch’i and this sense of soul are antithetical to the pervasive idea in the West that soul is separate from the body.

James Hillman approaches soul as a deliberately indefinite term that involves a way of looking at things, a deepening of perception, rather than as a particular entity. This sense of soul cannot be separated from the context in which it is experienced (1975, p. x). The same may be said about ch’i which is consistently viewed as an empirical force and arguably does not carry the extensive religious attributions historically associated with the prevailing Western notion of soul. Hillman’s commitment to keeping the openness and imagination of soul can benefit our reflections on ch’i, sustaining its inherent fluidity and change and guarding against the tendency to solidify it conceptually and establish fixed methods of engagement. In reflecting on the tradition of ch’i in East Asia, Tu Wei-Ming similarly described how the fluid and inclusive nature of the idea and the absence of an exact definition has furthered the imagination of it (1993, p. 37).

Pairing ch’i and the earthly sense of soul can complement both. The former in my view suggests the physical nature of how vital and soul processes move and circulate, arouse and inspire, and constantly transform and change experience and consciousness. It gives body and physicality. And the latter infuses imagination into our reflections on ch’i, keeping the change and creative flow informing its original Taoist conception. It helps to assure that the psychic and creative aspects of ch’i are not forsaken.

Ch’i will be approached here as a creative force that permeates all of life and manifests itself in infinite forms. This is perhaps consistent with Chang Tsai’s (1020-1077) sense of it being one material force as contrasted to how other traditions have divided it into two principles (yin and yang) and five agents (metal, wood, water, fire, and earth), all of which Chang Tsai viewed as aspects of ch’i (Chan, 2008, p. 495). As with any essential human condition, China has no doubt generated many different interpretations of the fundamental force of ch’i and practical methods for engaging it ranging from the encouragement of authentic and spontaneous expression to more complex, technical, and systematic practices such as the contemplative and medical applications of qigong. The idea of an elemental and soulful creative force resounds with everything I do.

In the Confucian tradition there is an emphasis on the cultivation of ch’i energy in moral and spiritual practices conducted in relationship to the forces and rhythms of nature. I encourage adding creative expression as a third element, with all three participating in a comprehensive cultivation of life-affirming and transformative energy that enhances personal well-being and the environments that sustain us.

In keeping with the psycho-physical nature of ch’i, I will concentrate on the material qualities of artistic actions and their effects; how particular acts of expression–the movements of a brush, body, voice—manifest creative energy. Experience shows that art ch’i takes many different forms and moves in endlessly varied ways with each gesture having its distinct qualities and impacts. Informed by the work of my mentor Rudolf Arnheim (1954), I have also explored the energetic expression of artworks themselves as in my 1993 essay dealing with the vitality and aliveness of objects and images and not just the physical act of making them. Tangible creative energy permeates both process and product as interdependent partners in artistic expression. 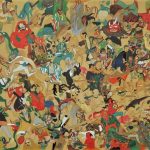